Skip to Content
Home Background Ornament in the Garden

As an attempt to reproduce the dream of Paradise the decorative garden is probably almost as old as agriculture, and ornamentation in the garden as old as the concept of “the garden” itself. Certainly the earliest archaeological record of a garden, decorated with flower pots and statuary as well as planting pits for herbs and vegetables, is that of the Greek Temple of Hephaistos, completed about 444BC near the Athenian Agora.

The Romans, with their advanced technology, elaborate architecture and high standard of living, had, by the 2nd century BC, developed farming, market gardening, and decorative gardening to new levels, and laid the foundations of the gardening ideals which were later explored in Renaissance Europe. 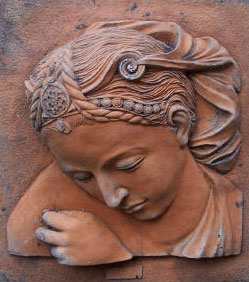 Over the centuries there have been a great many fads and fashions, but it was the surge of interest during the industrial revolution as the Victorian middle-classes began emulating the decorative stylings of the great landowners that has led to the profusion of designs and styles we see today. In the 19th century large workshops in Italy produced countless copies of antique statuary for the burgeoning markets in England and France. Once such pieces were in place the copies themselves began to be copied, and so the process developed.

The tremendous upsurge of interest in garden history and design in recent years has prompted a renewed fascination with the art of garden ornament. Decorative objects lend character and definition to a garden layout and play an important part in contemporary horticultural design. Garden ornaments can breathe life into a garden, whatever its size. When art is placed in a garden, we are invited to explore and enjoy the experience. Abstract designs, playful images, and forms in perfect balance bring discoveries with each new view.

Garden ornaments have always been produced in a wide range of materials – stone and marble, wood, metals, ceramics, and composites. The earliest ornaments were carved from stone or marble; composite stoneware and terracotta came much later, from the late 18th century onwards.

Composition stone is what we’re most concerned with here. Composite stone, invented by the Romans, is a wet mix of ground-up stone combined with various aggregates – basically a kind of concrete. Sometimes called “cement fondue”, “cast stone”, or “moulded stone”, It is tough, versatile and affordable, and can be moulded into an infinite range of shapes and designs.

With a moulded stone piece you’re unlikely to be getting something unique, but it is how the piece is coloured or otherwise finished that will give it its unique one-off quality. Thanks to the range of hand-applied  finishes we at The Green Man Tuinverbeelding use we can safely say that no two pieces will ever be exactly alike. 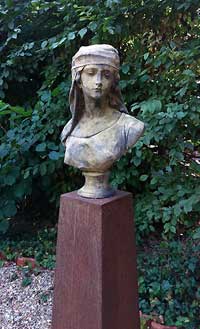 Placement of an ornamental piece is crucial in any garden. A modest but well-placed piece will always look better than a badly displayed object of high antique or artistic quality, and every garden, however small, offers great scope for design and the free range of imagination.

For many people cultivating a small space, the idea of using ornament can be intimidating and too often associated with an aristocratic past that has little relevance to the way we garden in the egalitarian present. But eyes are always drawn to a figure in a landscape, and there are thousands of designs to choose from to use as a focal point in your own garden. There is never a need to copy the designs of a classical past, and the only limitations are those of affordability and imagination.

At The Green Man Tuinverbeelding we want to bring another element into the crowded marketplace, one that has a deeper connection with our oldest mythologies, folk memories and beliefs, and connects us with our roots rather than the pretensions of the Victorians or the twee designs found in most garden centres today.  We want to put the magic and mystery back into the heart of the garden where it ought to be. In a careful, thoughtful design it is the mystery that lures you in through the gate, keeps you moving through the landscape, and fills you with excitement along the way. That sense of mystery can turn a mere display of plants, paths, and ornaments into an adventure. 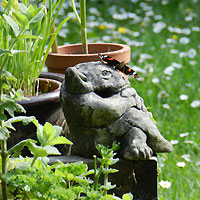 And let’s not forget to add a touch of playfulness and humour from time to time. The 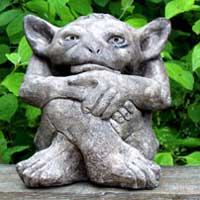 world of garden design, as well as the world of antiques, takes itself extremely seriously, probably to the point where much of the joy of discovery has been sucked out of the business. There’s no harm in pricking that particular balloon from time to time with a rude but well-placed troll, gargoyle, or laughing trickster. 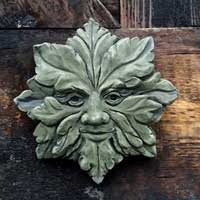 The one image that personifies the desire to recreate Arcadia and reconnect mankind with his roots in the natural world is the enigmatic figure of the Green Man. Seen on thousands of stone carvings in hundreds of medieval churches and buildings, and on ancient sites around the world the Green Man embodies the mystery at the heart of our dependence on the natural world. In our need to rewild and reclaim our heritage as co-creators of an earthly paradise we need a symbol, one that was here long before our time and that will remain to inspire others when we are gone.

Read more about The Green Man